All Collections
How to's
Set up your Organization & Structure
Adding Roles

This article walks through Roles in Cascade, how to create them, and attach a User.

Written by Jane Clinton
Updated over a week ago

Roles in Cascade have a 1:1 relationship with Users. This means that every User created must have their own individual Role. Even if two (or more) people are performing the same Role in your Organization, they will need separate roles created within Cascade. For example; if you have three Accountants you will need to create a separate Role with unique Role ID's for each, but these Roles can then have the same Title/Role Description/Organization Unit/Manager.

This is required because in Cascade Goals are attached to Roles (rather than being attached to Users). Therefore, if a User is appointed to a new Role, all the Goals the User owned in their previous Role will remain with that Role. The User will lose these Goals and inherit the Goals attached to their new Role (if there are any). This design is based on the fact that a User's position can be dynamic as employees may be promoted, leave or join the organization at any time - but you will want your strategic goals to remain stable within the structure of your plan.

Before creating a User in Cascade, you'll need to have a Role available to assign the new User. To create a Role in Cascade go to Admin>Organization>'Roles' tab, and then click the “Add Role” button in the top right hand corner. 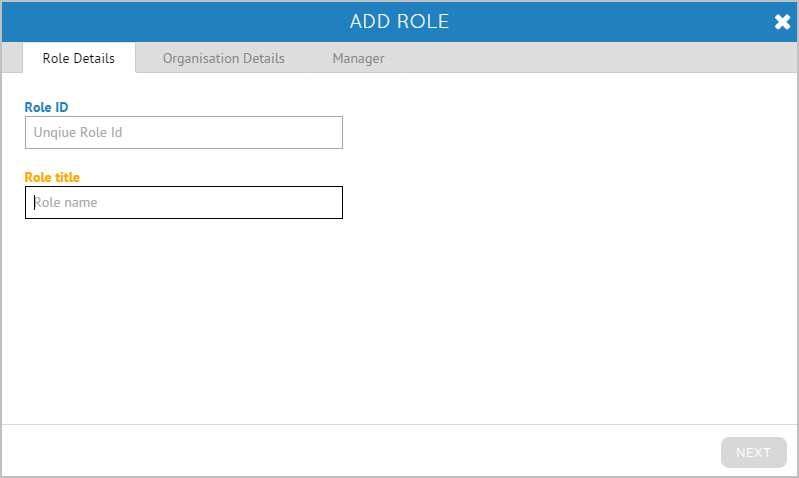 You will need to complete all three tabs to add a Role, starting with 'Role Details', followed by 'Organization Details' and 'Manager'.

A Role ID can consist of any string of letters and digits and must be unique in your Cascade instance, while the Role Title is allowed to be repeated. Your Role ID’s can be taken from a HRIS system already present in your organization, defined yourself, or you can leave this field blank and Cascade will automatically generate an ID for you.

You can select an Organization Unit from the drop-down menu. If you haven't set up your Organization Units yet, check out this article on setting them up. This will associate a role to a department and/or plan within the system. You may also need to select a Role Description.

Once created, your role will be “unappointed” – i.e. it has no user occupying it. The Role will still exist in the hierarchy, and you will be able to create Goals for this Role, but no-one will be able to login to that Role until a user is appointed to it.
To appoint a Role to a User, read this article about adding Users.