This article explains the private goal functionality in cascade, how to turn on private goals, and how can see these goals.

Written by Maddy Mirkovic
Updated over a week ago

Why do we allow you to mark goals as private?

Cascade has been built with the purpose of making an organization’s strategy visible to everyone. Despite being transparent by default, at Cascade, we acknowledge that some goals may need to be private. Hence our setting of “Restrict Visibility” or “Private Goals”.

The function is by default switched “Off”. Should you want to empower some users to “Restrict Visibility” of their goals given their position or role within a sensitive project, you need to go into “Admin > System > Settings” and then switch the “Strategy Visibility” to “On” (see image below).

Switching it on means that users will be able to select the option to “Restrict Visibility” when creating a goal.

When creating a goal, on the last page (“Settings”) you will have the option to “Restrict Visibility” by ticking the box (see below). 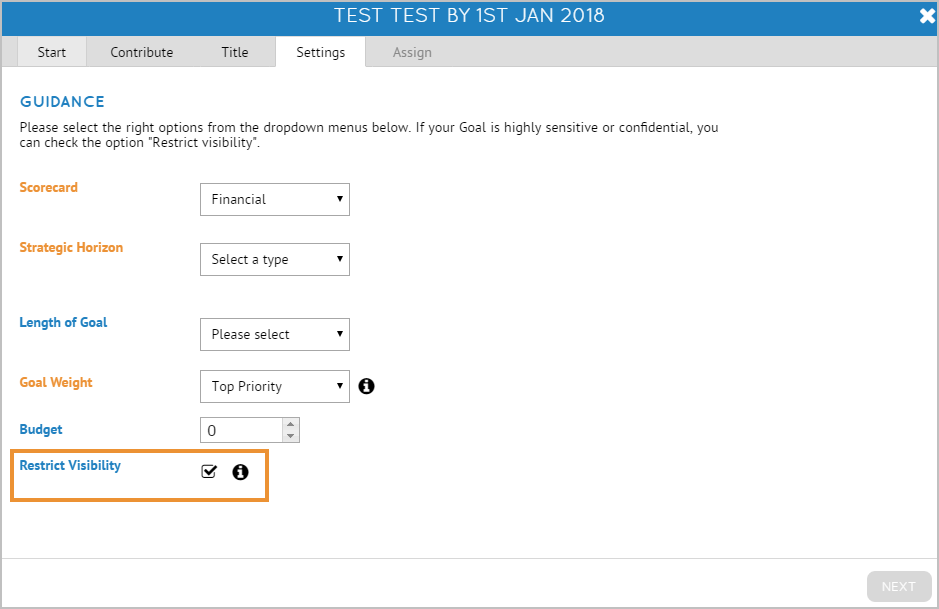 Who can view these goals?

The Goal is defined as “private”, but to maintain appropriate oversight and visibility, there are a few Roles and privileges that will still see the Goal (e.g. in the Strategy Plan, Report Snapshots etc.). These are:

The example below shows who can see a private Goal:

Scenario: I’m Florence Leclaire and I have a private Goal which has Ping Simo’s Goal as a parent. The Goal is highlighted in orange below, and can be seen by: